I love Keynote speeches.  They’re a chance to hear from a pro about big thoughts, big ideas, and offers a chance for big check-ins.  Unless I’m not really listening, I always come away inspired, refreshed and excited to take on more challenges.
Daniel MacIvor came through, in droves.
During his PWI 2011 keynote speech, Daniel MacIvor talked about the special privilege we have as theatre makers.  We get to move people, affect them, and create with them.  And the best part is that we get to do it live.  Live theatre offers a chance to commune with every one in the audience, onstage, and backstage.  At its best, it works like a well-oiled-creative-communing machine; at its worst, adrenaline flares and panic sets in.  Either way, it’s energizing.  It’s aLIVE.
MacIvor asked “Why do theatre?” and it’s a good question.  We can get so wrapped up in our stresses of “I should be writing more,” “I need to make a living,” and “where the hell am I going to get a big chalk board, a taxidermy dog, and a fire dancer in the next 24 hours?” Sure, our deadlines are very real…but not so scary that we should ever forget why we’re doing this.
I do theatre because I love collaboration.  I love working with other artists (administrators are included here) that are so passionate and so good at their job that I can’t help but be in awe of them.  I also love to collaborate with audiences.  It’s a rare occasion, but when an audience really gets what you’re doing, is really moved by the event—there is no bigger pay off.  We’ve affected them, asked them to think about something, posed a question to them that they’re excited to talk about.
I’ve asked some other theatre artists to share their thoughts on “Why Theatre?” and this is what they said.
Tammy Roberts, Performer/Publicist
It's two distinct facets of one thing that drives me: Shared Experience.  I love standing on a stage feeling, thinking, and breathing with a live audience.  It's electric.  I also love getting under the skin of a character, seeing what they see, feeling what they feel, acting as they would act ... sharing their experience.  When it really works, when everything connects, these shared experiences transcend the here and now -- and that's a phenomenal experience!
Jeremy Mason, Playwright/Performer/APN Board Member
Because it's hard. It's hard to choose a life where judgment is part of the game. It's hard to choose a life where you know you're not going to own a house. It's hard to choose a life where in economic uncertainty; you're "not needed". But those are the challenges that inspire me to succeed and continue creating, advocating and supporting theatre. I like being the underdog, because as an underdog you have more of an impact to inspire.
Thank you to Tammy and Jeremy for contributing, and thank you Daniel, for inspiring me to remember why I do it.
Why do you do theatre?
Posted by Alberta Playwrights' Network at 12:57 0 comments 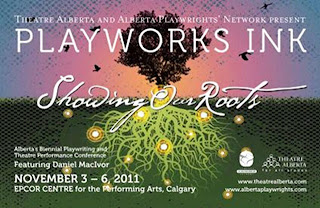 First, thank-you to the wonderful people at Saskatchewan Playwrights Centre and Alberta Playwrights Network who selected my play The Art of Homecoming for inclusion in PlayWorks Ink, Alberta's biennial playwriting and theatre conference held in Calgary November 3-6.The highlight for me was working with Sharon Pollock, winner of two Governor General's awards for drama and a Fellow of the Royal Society of Canada. Sharon is a blunt-spoken woman with a good eye for superfluous dialogue and a strong sense of what makes characters work. Along with the talented actors who workshopped my play, she made many suggestions that strengthened my script. The three-day workshop culminated in a staged public reading.

I enjoyed the other two workshopped plays--Mark C. Hopkins and Charles Netto's Super 8, a delightfully idiosyncratic two-hander, and Arun Lakra's Sequence, a stunning play that made probability theory, genetics and an incurable hereditary eye disease both dramatic and exciting.
In his keynote address, Daniel MacIvor suggested that theatre plays a role comparable to religion in teaching us about the human condition. PlayWorks Ink amply demonstrated the truth of that hypothesis. Jonathan Christenson's discussion of the principles which govern Edmonton's Catalyst Theatre was one of the best sermons I've heard.
Theatre is not the only area of life which would benefit from the practise of his ten Rs (responsibility, respect, responsiveness, rythmn, repetition, readiness, risk, rigor, restlessness and refinement). Jonathan is also a master of the aphorism. (Embrace contradictions. Surrender to uncertainty. Bring generosity to your work.) I'm trying to incorporate his teachings on the need for courage and commitment into my own life. His workshop showed his principles in action and increased my respect for Catalyst's innovative and challenging work.Conferences of this nature provide wonderful opportunities for meeting interesting people and send us home inspired with enthusiasm for the important work of theatre. I am grateful to APN and Theatre Alberta for making PlayWorks Ink possible.
Betty Ternier Daniels
Posted by Unknown at 14:32 1 comments

Day One is in the books. Yesterday, Michelle Kneale and I finished taking care of all of the little details in preparation for the weekend. We then sat back and watched all of the careful planning with our partners at Theatre Alberta begin to come to fruition.

Fifty people joined us at the Engineered Air Theatre where Keri Ekberg (ED at Theatre Alberta) and I welcomed participants, students and audience members in advance of the play readings. Keri spoke about how we both missed PWI last year and the audience, who obviously missed the event, applauded loudly.

We then turned over the stage to a reading of Super 8 a new play by the boys who bring you Swallow-a-bicyle Theatre, Charles Netto and Mark Hopkins. Directed by Sage Theatre's Artistic Director, Kelly Reay, Kira Bradley and Dave Trimble read the piece beautifully finding the honesty and charm of the characters - two loners in search of connection in the motel bar of the first Super 8 Motel built in the US. I can't wait to see it staged at Lunchbox Theatre in the new year.

Elyne Quan, originally from Edmonton, read from two new works of hers in progress. Both works were filled with genuine characters going through family crises that were threatening to tear their relationships apart. The pieces were incredibly moving. I always love plays about people going through huge transitions in their lives. I was moved by the story of Richie, a young and talented boy, whose brother Leo was trying to get them both out of life of struggle, poverty and abuse. Then there was the second piece that concerned a man named Robert, who is dealing with not only the loss of his wife Claire after 30 years of marriage, but the family secrets that her death has brought to the surface.

Elyne then took questions from the audience and one of my favourite answers to a question (and I'm paraphrasing here) was regarding the ethnicity of her characters. She stated that she doesn't write with an ethnicity, hers or anyone elses in mind. She writes plays about people and only asks that when her plays are produced, that the actors reflect the diversity of the community in which they are being performed. It reminded me of an article I read years ago (hence I can't remember who the playwright was) who stated when asked "What is your new play about?" responded, "The same thing all my plays are about...people."