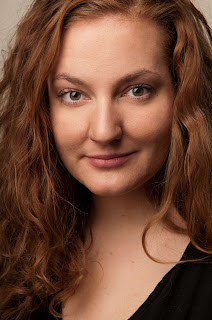 Bio:  Jacqueline Russell is a director, performer, playwright, and producer. A graduate of the University of Alberta’s BFA Acting Program, Jacqueline has toured across Western Canada with her feminist play Raunch (with co-creator Alice Nelson). She has worked as a performer/creator on several projects with Swallow-A-Bicycle Theatre, including Into the Abyss (High Performance Rodeo) and Across the Tracks. Last year Jacqueline produced (and directed several pieces for) “Girls gone Wilde” a festival of new work from female Canadian playwrights. Jacqueline has worked extensively in the TYA genre as both a performer and director. She is the Artistic Producer of Evergreen Theatre in Calgary, AB where she directs and produces educational children’s theatre that tours across the province. Her newest artistic adventure is as the Artistic Producer for Urban Curvz Theatre in Calgary.

Who are you?
A very lucky girl, who gets to do what she loves and get paid for it.

What are you working on?I am currently working on a play that was commissioned by the Town of Morinville in celebration of their 100th Anniversary. I went out and spent a week in Morinville last spring interviewing residents and researching the town's history and wrote most of it over the summer. It will be performed in October. Even though I made a few Corky St. Clair jokes about it, there is a lot of really griping material to be found in a small town.
What inspires you?
Other artists. Watching my friends and colleagues take on the crazy challenges of self employment, lack of resources, constant self doubt etc. and then seeing them some how managing to create phenomenal art. It makes me want to paint my face red and white and run up and down 17th ave screaming and cheering.
Also brave, funny women. Tina Fey, Lucille Ball, Ariel Levy. The first play I ever wrote was about Nellie McClung. I was 13. I won a Canadian Heritage Prize for it. I always call on Nellie when I am in need of some guts and guile.
What is your favorite play?
That's a tough question. I can think of three plays where the images and words have continued to float in my mind for years after I first saw them. I, Claudia by Kristen Thomson, Frozen by Bryony Lavery and Jake's Gift by Julia Mackey (which is part of Lunchbox Theatre’s season this fall! Don’t miss it!)
Who is your favourite playwright?
That's even tougher. Judith Thompson, Ann-Marie MacDonald, and Timberlake Wertenbaker are all playwrights who made me want to try writing plays.
Interested in being profiled? Don't hesitate to email us and let us know! We want to get to know you.
Posted by Alberta Playwrights' Network at 18:16