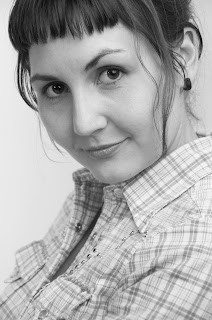 Alice is an actor, playwright, director, puppeteer, improviser and clown. She holds an MFA from Dell’Arte Physical Theatre School in California and a BFA from the U of L. Alice’s company, Organized Crime, will perform a staged reading at the Auburn Saloon of her new co-created musical, KEEP SWEET: A Polygamy Musical. Organized Crime will be performing Land of Dream, a clown show about chasing the American dream, at the Motel in December 2012. Last season, Alice was selected as Lunchbox Theatre’s Emerging Director. Her credits included directing Mockingbird Close and assistant directing Perils in Paris, Last Christmas, Super 8 and Whimsy State. She directed Picasso at the Lapin Agile for Morpheus Theatre, Sleeping Beauty for Loose Moose and The Boy's Own Jedi Handbook for Empress Theatre.  Alice has also written and toured several shows, including three solo shows: Swashbucklers, Local Celebrity and Elephant. She co-created and toured RAUNCH: The Rise of Female Chauvinist Pigs and was commissioned by Empress Theatre to write an original clown show, The Worry Wart. Alice teaches and frequently leads workshops in clown, melodrama and improv. Her passion is supporting Clowns Without Borders and raising awareness of their amazing international work!

1) What is your writing process? Do you start writing right away? Outline? Research?
Research (mostly reading books on a subject), ramble about an idea to friends, my folks, anyone willing to listen, more research, more rambling, watch movies on the topic, watch movies loosely related to the topic, watch movies unrelated to the topic and then chastise myself for slacking off. Research, write a grant, ramble, write another grant because the first one was rejected, almost give up, get a grant and then think, "Damn it, now I have to get to work." Stare at the computer screen terrified to write a first draft that will be awful. Make an outline with post-it-notes. Then start writing - no, wait, I need to do more research. Get back to writing. Change outline completely. Write. Edit as I write. Get a few close friends and colleagues to read it. Write down all the feedback I get...eat a bucket of ice cream, rewrite, rewrite, rewrite, rewrite. Basically, never fall in love with being done.

2) Where do you write?
My living room. Usually at around 6am. By the second cup of coffee, I really think I'm on to something.


3) What do you need to have with you when you write?
Post-it-notes. My reference books are filled with post-it-notes. I also do my outline with colour coded post-it-notes on giant poster board, so it's like a display at a junior high science fair. Then I carry that around to meetings with the creative team. Nerd.


4) What was the last great play you saw? What made it great?
How I Became Invisible by Clunk Puppet Lab, last September at the Vertigo Studio Space. Since its debut, the artistic directors have rewritten the show, so that the visual magic is linked strongly to a story of the human condition. As I volunteered on the show last time it was produced (sweeping the floor and painting props) the artistic duo asked me on board as a puppeteer for the updated version which is touring to Almonte, Ontario for the Puppet UP Festival in August. How often do you get asked to work on the last great play you saw?

What made it great was how they created a detailed, visually compelling world onstage and their animation of the characters was filled with surprises and magic.

6) Who are your mentors?
Ronlin Foreman, alchemist and instructor from Dell'Arte Physical Theatre School, "If you want us to believe you, you must believe." TJ Dawe, who encouraged me in my writing, "Don't worry if you're not sure where your writing is going. It's important and valuable just to explore. You don't catch any fish if you don't go fishing."


7) Do you have writing rituals?
Procrastinating? That happens pretty traditionally.


8) Best advice for when you hit a wall?
Walk it off. Or sleep on it. Or keep writing. The first draft is always the rough draft, write stuff now knowing if it's good or not. Just write and write lots. Over write. It will get better. But it has to be words on a page first.