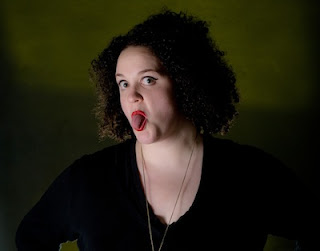 Who are you?
I'm Michelle Kennedy. Always have been, always will be. I think...
(is this funny? should i say that?)

What are you working on?
A lot. I write every day and am writing a ton of non-fiction and working on my "essayist" muscle. I am working occasionally on a one-woman show about John Cusack and I frequently go back to to an even older play called "The Golden Record". It feels really nice not to be stressing about starting a fringe show right now...

What inspires you?
People I meet, books I read, coffee I drink, kissing, fighting, falling in and out of love, cooking, and working with collaborators who are GREAT writers.

What is your favourite play?
I have a few: Val Paraiso by Don DeLillo, Drama by Karen Hines and Trout Stanley by Claudia Dey

Who is your favourite playwright?
Blake Brooker, MacIvor, Chris Craddock and Karen Hines. All equally and all for entirely different reasons.

Do you have any writing rituals?
I write by hand. When I am working on a play or a piece of fiction I find a pen and a notebook and I write. It keeps my thoughts flowing in a less stunted way, notebooks don't have the internet and when I do type it out I am writing a second draft. I write poorly on the computer.

What made you want to become a playwright?
I sort of always did it. Even as a kid writing weird little stories I was moved to dialogue and all the things that were left unsaid. And I loved writing stage directions that were impossible and it made the whole process so much fun that I never really stopped.

Interested in being profiled? Don't hesitate to email us and let us know! We want to get to know you.

Posted by Alberta Playwrights' Network at 11:37