It was a pretty amazing weekend of networking, exchanging ideas and being immersed in art and theatre making. 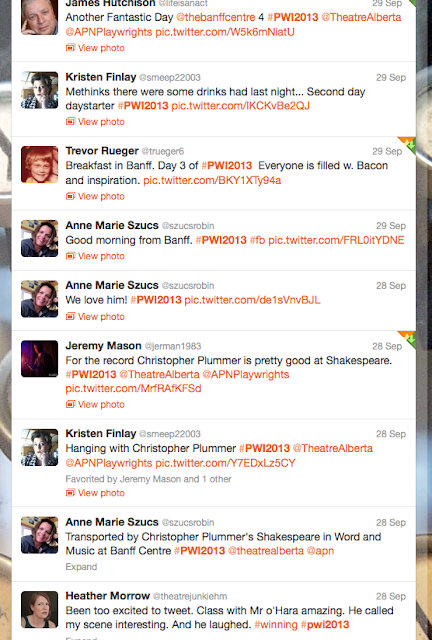 First of all a huge thank you to all of our sponsors, funders and supporters who helped to bring this conference to life.
Where to begin?

How about being in the presence of Mr. Christopher Plummer as he spoke eloquently and openly about his process and what it is to be an actor. Followed up by a stunning reading of "Last Chance Leduc" by Katherine Koller (winner of the 2013 APC). And that was a half day on day 1!!

I had the great fortune of being able to participate in our playwriting masterclass instructed by Mr. Robert O'Hara, called "Facing The Rewrite". His class was not about how to rewrite, but rather provided exercises and new ways of approaching the material, with an eye to breaking through those blocks. It certainly opened my eyes and has altered the way that I will approach the work from here on in. Through the two days, Mr. O'Hara gave each playwright a specific re-writing assignment which he assigned as a way of addressing a specific problem or as a way of forcing a writer to see the work in a new way. We will be publishing the list of rewriting assignments he took the writers through on our website.

Robert admitted that he didn't have that much familiarity with Canadian playwriting, but stated to the group at the final wrap-up "If this [group] is an indication of the quality of writing and writer in this country, you guys are in good hands."

Saturday night, we were once again in the presence of greatness. Mr. Christopher Plummer performed some of his favourite pieces of Shakespearean text set to the music which was inspired by the writings of the Bard. The only way to describe it would be to state that it was like watching Beethoven play the harpsichord. A master effortlessly sharing his mastery.

While I didn't have a chance to attend any of the other sessions, I heard nothing but great things about Kelly Robinson's Musical Theatre classes, Sharon Pollock's class on Storytelling and Narrative, Leah Cherniak's class on Director as Experimenter and Chris Craddock's sessions on Solo Creation.

The Banff Centre was extraordinary as it always is. Not only is the setting unbelievable, but the staff and support they provided to APN and Theatre Alberta was second to none. A huge thank you to Casey, Allanah & Heloise and all of the other staff that make that center the place every artist needs to come to.

I would also like to thank Keri, Frazer, Aaron & Maura and everyone else from Theatre Alberta. They are truly the best partners one could hope to work with. And to Michelle and Tracy and all of the APN board who attended and assisted at the conference, the conference couldn't have happened without your work and brilliance.

I had an opportunity to wrap up Robert's masterclass and asked everyone what they were going to take away from the weekend. When it came to me to speak, I shared the following; "As APN is facing some challenges, I've been asking myself 'What is it as an organization that we do and who do we do it for?'. Sitting in this room with this group of playwrights, I am reminded that you are who we do it for and this is what we do."

You don't often get to see the fruits of your labours, but looking around that room I saw 18 playwrights that I have worked with and grown with, that APN has cultivated. The Banff Centre describes itself (accurately so) 'the largest arts incubator in the world'. If The Banff Centre is an incubator, APN is a cultivator. We prepare the soil and nutrients so that our members can plant themselves, take root and grow. This weekend reminded me why I'm holding the tiller.

Our organization has some challenges ahead and the support of our membership is going to be paramount to our continued success and growth.  We love working for you and we need you working for us. We encourage you to donate what you can, be that a financial donation, a donation of time or a donation of information. Fundraising is our major focus at the moment and if you have any thoughts on potential sponsors or leads, foundations or grants we can apply for, let us know.

See you in 2015 for the 11th PlayWorks INK Conference...planning is already underway...